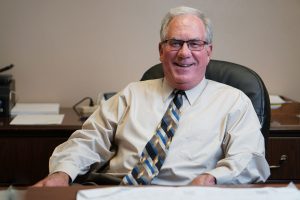 Doug Fosheim graduated from California Western School of Law in San Diego, Californaia in May of 1979.  After his first year of law school he was ranked in the top 10% of his class. In law school he was active in appellate advocacy and served on the board charged with administering the appellate advocacy program at California Western. He was a member of the Judicial Council at the law school and graduated with the “Dean’s Award” which is given to members of the top 25% of the graduating class. After graduating he moved back to Huron, South Dakota and began practicing law in the firm in which he is currently practicing–Fosheim, Haberstick & Hutchinson. He has attended Continuing Legal Education programs sponsored by the Dakota Bar Association since his admission to the bar in 1979. In 1986 he was elected to the South Dakota House of Representatives and served 3 terms. He was recognized by the South Dakota Trial Lawyers Association for outstanding service to the legal system as a legislator. In that capacity he was also named as the “Conservation Legislator of the Year” by the South Dakota Wildlife Federation. During his legislative service he was appointed to and served on the South Dakota Corrections Commission. For several years he served as a member of the South Dakota State Fair Advisory Commission. He also served as a board member of the Mid-Dakota Rural Water System, Inc. which provides Missouri River Water to Central South Dakota to farms, ranches and towns. As a member of the State Bar he chaired the Public Information Committee, served on the Continuing Legal Education Committee for the bar and is a past member of the South Dakota State Bar Ethics Committee. He served as a part-time Deputy States Attorney in the early eighties and as City Attorney for the City of Huron from 1995-2003. He is a member of the Huron Area Chamber of Commerce. Currently, Doug is engaged in the general practice of law in Huron, South Dakota where he prefers performing legal services in the in the areas of wills and trusts, farm estate planning, probate, business law, and Social Security Disability. Doug and Ardelle have two grown sons.